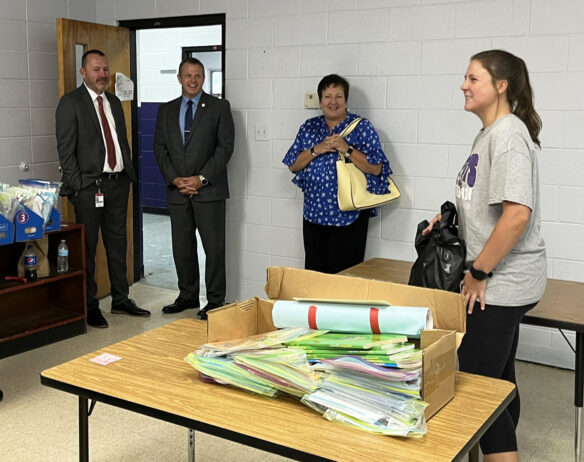 Perry County Superintendent Jonathan Jett, from left, Commissioner of Education Jason E. Glass and Kentucky Board of Education Chair Lu S. Young visit the room of Autumn Cooper, a kindergarten teacher setting up her classroom at A.B. Combs Elementary School. Cooper formerly taught at Buckhorn School, which is unusable this year due to the damage caused by the flood. Photo by Toni Konz Tatman, Aug. 31, 2022

(FRANKFORT, KY) – After spending two days surveying the damage in flood-ravaged eastern Kentucky, state Education Commissioner Jason E. Glass said seeing the way that communities had come together to help recover was an experience that had moved him.

“Spending time in eastern Kentucky has inspired me greatly,” said Glass on the second day of his tour of flood-impacted school districts. “To see the ways the communities have come together to recover — no pictures do this justice.”

“Seeing the aftermath of the flooding firsthand was a shock to my system, but it bolstered my determination to do all I can to support their recovery efforts,” said Young.

“I am so grateful to have had the opportunity to visit these amazing school districts and their heroic leaders,” she said. “I left there with a renewed sense of hope for the future of the children and families they serve. Our administrators and staff are deeply committed to doing all they can to help their communities through yet another disaster.”

Perry County Superintendent Jonathan Jett said his district has a lot of challenges to overcome. Several buildings were damaged and school staff are trying to locate nearly 200 students who likely have been displaced because of the flooding.

Those are in addition to hundreds of other students district officials have made contact with and know they have been affected by the flooding.

“We have hundreds of families who have been impacted, many are school-based staff who have lost everything,” he said. Despite these challenging circumstances, Jett said his staff has gone above and beyond to serve people in the school and community.

“I don’t have to tell people when or how to roll up their sleeves, they do it on their own,” he said. “I cannot praise the teachers, district administrators and staff enough. They always show up and serve our students and this community.”

Two of the district’s schools, Buckhorn and Robinson Elementary, were severely damaged by floodwaters. Students from both schools will be taught this year at the district’s A.B. Combs Elementary campus, a building that once held more than 700 students and was once the largest elementary school in Perry County. It has since been used primarily for sports since its closure in 2017.

On Aug. 31, A.B. Combs was bustling with energy, as teachers, staff and community members painted hallways, waxed floors and began to decorate classrooms. One wing of the school is painted blue – for Robinson, the other is painted purple, for Buckhorn.

Courtney Hall is a 2nd-grade teacher at Robinson Elementary. She said Robinson is so much more than a building to her.

“My grandparents met at Robinson,” she said. “My grandpa was a teacher, my mother is a teacher. … Education is a major part of who I am.”

After the flooding resulted in her unexpected move to the A.B. Combs Elementary campus, Hall said she was even more surprised by her new classroom.

“My grandpa taught school at A.B. Combs,” she said. “I will be teaching in his former classroom.” 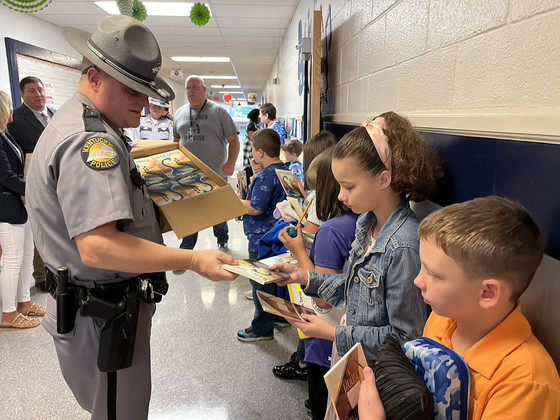 Hazard Independent Superintendent Sondra Combs said that while the school district’s buildings escaped major flood damage, many families were affected by the flooding.

“Our community was impacted, but our facilities not so much,” she said. “Some things, though, like air filtration, ice and water filtration, those things need to be replaced after floods. You don’t really think about that until you get back into the buildings.”

KSP worked together with KDE and the Kentucky Valley Educational Cooperative to get the 15,000 books distributed to schools in eastern Kentucky.

At Hazard High School, Glass and Young saw the mathematics, health sciences and science classrooms. Glass began his career in education at Hazard High more than two decades ago. He even saw his former classroom.

“It was amazing getting to see the school again, visit the classroom where I taught, and walk the field where I began my career,” he said. “I will always be grateful for that experience.”

Glass heard from many students while there. Almost an entire room full of students raised their hands when asked who had volunteered during the flood recovery effort.

“These folks are rock stars,” Watts told Glass and Young. “They work late, they come in early, they work on weekends, … whatever it takes for our kids.”

Breathitt County suffered heavy damage during the flooding, including damage to homes and school buildings. Breathitt County also lost community members to flooding. Vanessa Baker, administrative assistant at Marie Roberts-Caney Elementary, has been missing since floodwaters swept her away over one month ago.

Stacey Davidson, an instructional supervisor in the district, saw significant damages to her home once flood waters receded. She said the water reached 7 feet in her home.

“It was a scary time. We are safe,” Davidson said. “We had a place to go. We are blessed.” 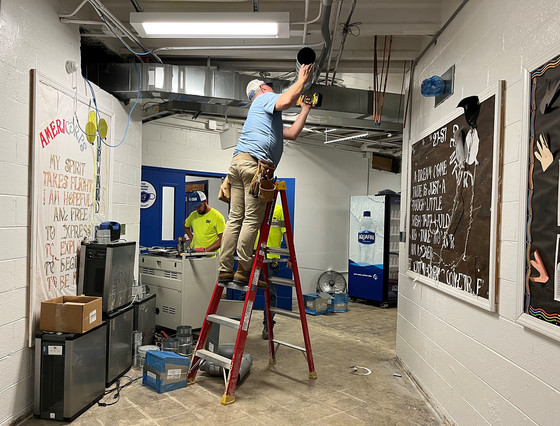 In 2021, Breathitt High School’s building sustained damages to its art room and JROTC space as a result of flooding. With the most recent flooding, the facility was once again underwater.

Breathitt High Principal Charles Davidson said the facility’s repairs from last year had not yet finished. Contractors were continuing to work on the art room and JROTC space when floodwaters crept up again.

At the Breathitt County Area Technology Center (ATC), floodwaters rose several feet inside the building. Despite having been moved to avoid flooding, the center’s tiny house that students had been working on sustained severe damages. Principal Joseph Mayabb said the building has always been a place of learning and pride for the entire community.

The ATC, operated by the KDE, will likely be a total loss, said Glass. The center is now operating as part of Hazard Community and Technical College’s Lees College campus, using facilities there for its career and technical education programs.

“It felt like moving into a home we hadn’t paid a down-payment on,” Mayabb said. “She and I both knew we needed a place to go. I am truly thankful that we have this opportunity.

“It isn’t ideal for everybody, but it’s better than the alternative. Our kids have been through this right here with us.”

District leaders said the school year got off to a smooth start on Aug. 29. Davidson said the students at Breathitt High School are enjoying their school days and the pandemic’s disruption and aftermath of the flooding have provided the school with more opportunities to help care for students.

Jackson Independent Superintendent Wayne Sizemore said while his district did not have damage to its facilities, families were affected and district staff are “still trying to piece everything together.”

The district’s location allowed it to serve as a resource center for the community in the days following the flooding.

“We went in wherever we were needed,” Sizemore said. “We are so vested in our community, it was just natural for us to do what we could to help.”

Sizemore thanked the General Assembly for its special session last week, where it allocated approximately $213 million for disaster relief in the short term, including $40 million to KDE for school cleanup, repair and wraparound services. The bill also includes up to 15 student attendance days to be waived and expands the use of remote instruction for students and emergency leave for educators in flood-impacted districts.

“We have several students who were displaced and are utilizing the virtual option,” he said. “One is a senior and had this not been available, she would have had to move districts and not been able to graduate with her class.”

“We are going to need the extra support, not just for our kids, but for our staff,” he said. “Because communication was so limited in the days following the flood, there is a lot of separation anxiety. We have seen this when parents are dropping off their children.

“This is something that will not go away anytime soon.”